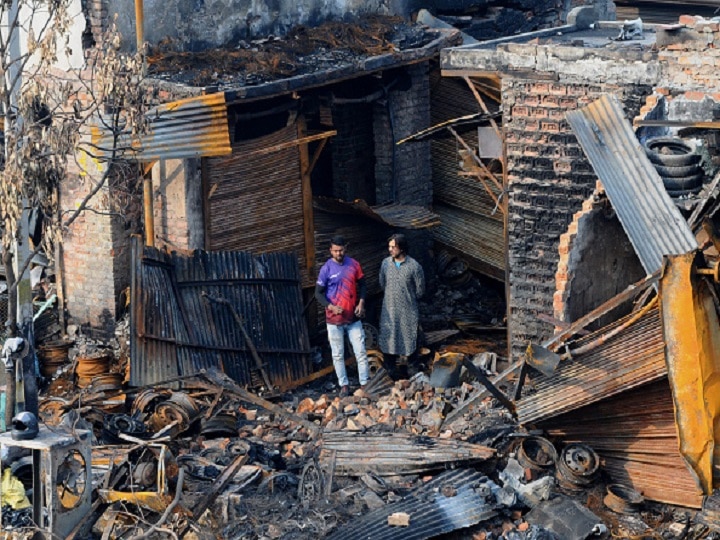 The chargesheet filed by Delhi Police states that the probe revealed that Hussain had funded the violence that broke out in the area for which he spent Rs 1.30 crore.

The chargesheet which runs into 1,030 pages names Hussain, his brother and 15 others as accused. (File Photo/ Getty)


New Delhi: The Delhi Police in its fresh chargesheet filed in the Karkardooma court in connection with the northeast Delhi riots case has claimed that suspended AAP councillor Tahir Hussain “prepared for the riots well in advance”.

The chargesheet which runs into 1,030 pages names Hussain, his brother and 15 others as accused relying upon the testimonies of over 75 witnesses. The chargesheet hints that Hussain had planned the riots well in advance because all the CCTV cameras installed near his house were shut.

During the investigation, when the Crime Branch team scanned the CCTV footage, the police could not find anything. The chargesheet also states that when riots broke out in Chand Bagh on February 24 and 25 Hussain was present inside his house in Chand Bagh.

He was clearly seen on the rooftop of his Chand Bagh house on February 24 and as per the voluminous document, he was the one instigating people for the riots.

According to the chargesheet, Hussain played a major role in the violence and it is alleged that he was the “mastermind” of the riots that broke out in the Chand Bagh area.

“Investigation has revealed that there was a deep rooted conspiracy to cause riots in North East Delhi. Tahir Hussain, a politician of Aam Aadmi Party and sitting councillor in EDMC, Delhi, played a pivotal role in the incident. His younger brother, Shah Alam was also arrested,” the police said in a statement.

“Recovery of crates containing glass bottles having some liquid filled in them and their necks stuffed with pieces of cloth, which were used/to be used as Molotov cocktails, large number of bricks and stone pieces and three catapults from the house of accused Tahir Hussain further point towards the conspiracy and the extent of preparation for causing riots in the area,” the statement said further.

The chargesheet states that the probe revealed that Hussain had funded the violence that broke out in the area for which he spent Rs 1.30 crore.

Even on the rooftop of the four-storey building a number of petrol bombs were found intact with a catapult that was used to launch the petrol bombs and stones on nearby houses.

The fresh chargesheet, however, states that the crime branch has not been able to ascertain the source of the said petrol bombs yet. The stones which were found were prepared in his house, the document states.

“It was interesting to find out that on 22.2.2020, Tahir got his pistol released from Police Station Khajuri Khas. This is just one day prior to the starting of riots in Delhi. He was found connected to Khalid Saifi and Umar Khalid who are part of a larger group of persons who were organising riots and protests in Delhi,” the statement of the police said.

Communal violence had broken out in the parts of Delhi in February after clashes between pro- and anti-Citizenship Amendment Act agitators spiralled out of control, leaving 53 dead.

India has seen over 5 lakh cases of Covid-19 in the past 44 days. On top of that, several incidents of inhumane behaviour...
Read more
INDIA

India has seen over 5 lakh cases of Covid-19 in the past 44 days. On top of that, several incidents of inhumane behaviour...
Read more

Is there unrest among ranks of People’s Liberation Army? | Matrabhumi

Ever since the clashes at Galwan valley on June 15, the Chinese government has been silent on the casualties on its side in...
Read more

Congress claims, Shivraj & Scindia both will be sidelined after loss in MP bypolls

If there's anyone who knows a thing or two about denim, it's our editors. We've...
Read more

New Delhi: Supreme Court while hearing a plea by foreign members of Tablighi Jamaat on Thursday pronounced that...
Read more

Rashmi Desai to feature in a music video soon

'Naagin' and 'Uttaran' fame Rashmi Desai will soon be seen in a music video. The title of video is Tamas. Adhvik Mahajan will also...
Read more

Earthquake terror has hit India again and this time it was in Ladakh. The tremors were felt by the residents around 1.11 pm...
Read more
Load more

India has seen over 5 lakh cases of Covid-19 in the past 44 days. On top of that, several incidents of inhumane behaviour...
Read more

What You Can Do to Combat Racism

The devastating current events—most recently the murders of George Floyd, Ahmaud Arbery, Breonna Taylor—are a wake-up call for many looking to do better, help in whatever...
Read more