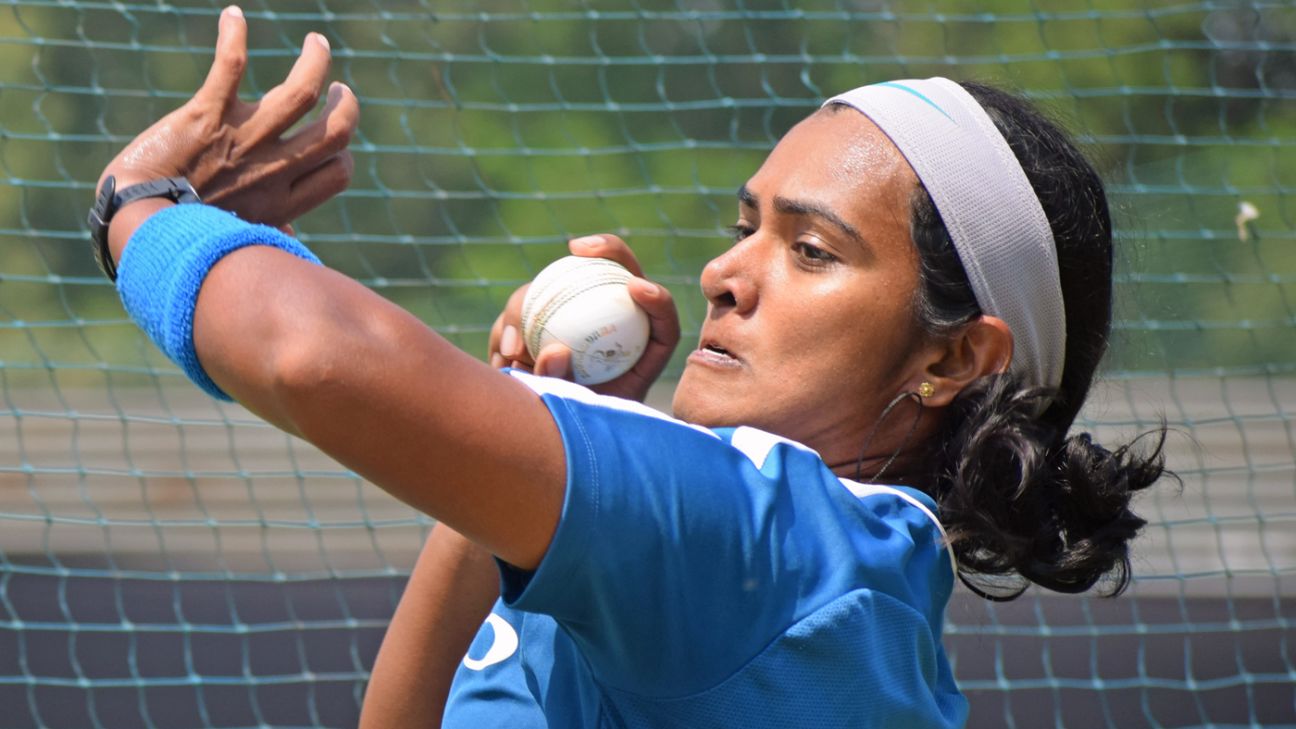 India pace-bowling allrounder Shikha Pandey has become the latest in a long line of cricketers to offer views on whether women’s cricket needs any tweaks – like smaller balls or shorter pitches – to help it further flourish and attract more fans. In a series of tweets, Pandey on Saturday said “most of the suggestions” to alter the women’s game were “superfluous”.

“Please, don’t compare women’s sport, women’s cricket in this case, with men’s sport. We need to see it as a different sport altogether… A sport that 86,174 spectators turned up to watch on March 8, 2020 and several million watched live on their television sets,” she tweeted, referring to the record crowd at the final of the 2020 T20 World Cup between Australia and India at the MCG in March.

I have been reading/ hearing a lot about the changes being suggested to help grow women’s cricket/ make it a more attractive product. I personally feel most of the suggestions to be superfluous.

A mainstay of the Indian attack that finished runners-up both at the 2017 ODI World Cup and the recent T20 World Cup, Pandey wrote, “Reducing the size of the ball is fine, but as Ian Smith suggested, it only works if the weight remains the same. This will allow for bowlers to grip the ball better – more revs for the spinners – and hits will also travel further (not be the case if it is light).”

As for reducing the length of the pitch from 22 yards, Pandey said: “An Olympic 100m female sprinter doesn’t run 80m to win First place medal and clock the same timing as her male counterpart,” she wrote. “So the whole ‘decreasing the length of the pitch’ for whatever reasons seems dubious. Also, it almost definitely takes the double-headers [with the men’s teams] out of question.”

Instead of “tinkering with rules or the very fabric of the game to attract an audience”, Pandey said, “Growth can be achieved by marketing the sport well.”

She also advocated more technology in the women’s game. “Why not have DRS, Snicko, Hotspot, all of the technical acumen and live broadcast for every game that we play anywhere in the world.”

This is a quality thread!!! Must read and well done Shikha https://t.co/vbuTJ1IDj1

Potential changes to the women’s game, such as using a shorter pitch and a smaller ball, were suggested by New Zealand captain Sophie Devine and India batter Jemimah Rodrigues in a recent webinar conducted by the ICC. Then, in a series of interviews by ESPNcricinfo last week, the likes of Smriti Mandhana, Rachael Haynes, Lea Tahuhu, Kate Cross and Nida Dar had also laid out their views on the debate.

“If it [the act of proposing tweaks] is about bringing it [women’s cricket] aesthetically closer to the men’s game, I don’t think that’s the right way to go about it. The women’s game is a good product that’s continuing to evolve & make its own mark,” Haynes said.

ALSO READ: Should the women’s game use a shorter pitch and a smaller ball?

Tahuhu pointed out that “if you’re having to prepare two-sized pitches, then you lose out the opportunity to host double-headers with men, while Mandhana added: “Although I feel women’s cricket is exciting as it is… reducing the length might make it interesting from the viewer’s perspective.”

Cross and Dar emphasised that better infrastructural and monetary investment and more publicity on the part of the media is the ideal way to the take the women’s game forward. “Having the WBBL, the KSL, the Hundred or a women’s IPL – that’s the kind of change the women’s game needs,” said Cross, while Dar wondered, “How about publicising the matches rigorously on social media and mainstream media? … Give players more incentive to raise the standard of the game and things will get more entertaining.”

The remaining two ODIs of the ongoing series between India and South Africa will be played to empty stadiums. The development comes in the...
Read more
Sports

Price: (as of - Details) Proudly powered by up to AMD Ryzen 7 4000/Intel 10th Gen series mobile processor with Radeon/Intel graphics, the...
Read more

Shatrughan Sinha's son Luv Sinha is contesting Bihar Elections 2020. He said that he will be giving a good fight to other parties...
Read more

‘I could only bring half of me’: Adele jokes about weight loss while hosting SNL

The fight of Bihar has been a roller coster ride. From promises of jobs to development demands to flood-affected states to caste politics,...
Read more

Nafed Director, Ashok Thakur, was speaking to ABP News over rising prices of onions. He said that the rise in price would be...
Read more

Price: (as of - Details) The desktop/laptop speakers are endowed with amazing features, these versatile speakers will provide you with crystal-clear sound &...
Read more

New Delhi: Amid rising border tensions with China, India and the US on Monday said they would sign...
Read more

EmRata Debuted Her Baby Bump With a Nude Shoot for Vogue

Just a little bit of celebrity baby news to kick off the week: Emily Ratajkowski has announced...
Read more

Has Mehbooba Mufti challenged integrity of India to restore Article 370?

Tiranga march was held in the streets of Jammu and Kashmir against the anti-national and anti-tricolour statements of former Chief Minister Mehbooba Mufti....
Read more

The Election Commission (EC) has sent a notice to Kailash Vijayvargiya over using the words 'Chunnu Munnu' for Digvijaya Singh and Kamal Nath...
Read more

Price: (as of - Details) Slip-on and glide into the enhanced world of bass with zero discomfort. Enabled with Advanced Dynamic 32mm driver,...
Read more

Once again Nitish Kumar was seen in his angry avatar. The reason were a few slogans which were raised against the Nitish Kumar...
Read more

Price: (as of - Details) Proudly powered by up to AMD Ryzen 7 4000/Intel 10th Gen series mobile processor with Radeon/Intel graphics, the...
Read more

Shatrughan Sinha's son Luv Sinha is contesting Bihar Elections 2020. He said that he will be giving a good fight to other parties...
Read more

Price: (as of - Details) Shake up your life with the Fujifilm instax mini 9 - a compact instant camera with a cute...
Read more